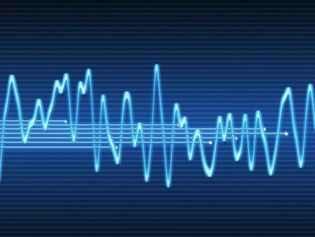 Leuko-araiosis (LA) is the term describing lesions and rarefaction of the cerebral White Matter (WM) and is frequently seen in aged individuals. Although the mechanism of LA remains unknown, a decrease in cerebral perfusion is suspected to be linked to LA. Many patients can have LA without associated any clinical abnormality, however new findings suggest that LA may be clinically important. Patients with LA have a decreased prognosis in term of death, stroke and myocardial infarction occurrences. The aim of our work was to study the relationship between LA and the natural brain tissue velocity due to pulsed cerebral perfusion. Brain velocities were measured with an analog of the Tissue Pulsatility Imaging (TPI) method described by Kucewicz [1], and already used in our group for depressed patients [2].
Nine voluntary healthy women aged between 60 and 85 were enrolled in this cross-sectional study. Transcranial acquisitions were performed with a 2 MHz phased-array probe through the right temporal bone window and offline estimations of velocity were performed by correlation on the RF signals. MRI examinations were performed on a 1.5T GE system using dedicated software (MRIcro) to obtain a volumetric analysis. The primary endpoints
of the study were the maximum brain velocity (TPImax), the absolute MRI volume of WM hypersignals (VAbs) and the relative volume on the right hemisphere. The Pearson correlation coefficient was used for statistics.
Our main finding is that TPImax decreases significantly when the severity of LA increases, see fig.1. Significant inverse correlation between TPImax and VAbs (ρ = -0.81 p < 0.004) is observed despite the small size of our recruitment. LA and other neurodegenerative pathologies being considered to have a strong link with brain vascular defects, the ultrasonic TPI method appears to be valuable and promising.